Journey to a New Land

Sustained Punjabi migration to California began around 1900. Events in India and the U.S. combined with numerous immigration laws created several different waves of migration. Members of the Sikh faith made up the majority of the pioneer Punjabi immigrants, though small numbers of Muslims and Hindus also made the journey. Due to immigration barriers, these pioneers were mainly men unable to bring their families. As laws changed, women and children were also able to come to the U.S. Regardless of which era they came, these Punjabi immigrants willingly took enormous risks and worked hard to make California their home. 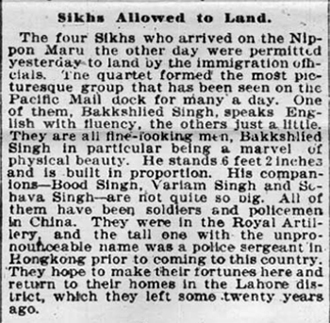 At the time this article appeared, immigrants from India were a rarity. The author of the article found the Sikhs strong, vigorous men, but he had a hard time pronouncing their names.

This racist cartoon shows how far the stereotype of Indian immigrants in 1910 differed from reality. Most immigrants were Sikh, and those Sikhs who wore a turban usually had unshorn beard. It was almost unheard of for a turbaned Sikh to smoke. And according to Dr. S. H. Lawson, ship surgeon of the Monteagle and the Tartar, they were "one hundred percent cleaner in their habits" than the European steerage passengers he encountered in his duties. "The Sikhs impressed me as a clean, manly, honest race."